The Ministerial Meeting of the Western Balkans Platforms on Culture, Research and Innovation, Education and Training was organised in Tirana on June 27-28, 2022 with participation of the respective Ministers of the Western Balkans and co-chaired by the European Commission, the French Presidency of the Council of the European Union, and Albania represented by the Ministries of Culture, Education, Sport and Youth. Furthermore, the Butterfly Innovation Awards Ceremony by the Regional Cooperation Council (RCC) and the launch of the Science for Policy Report “Status of Environment and Climate in the Western Balkans” by the Joint Research Centre (JRC) took place during these two days in Tirana.

Information about the individual events as well as the link to the conclusions can be found in the links below. 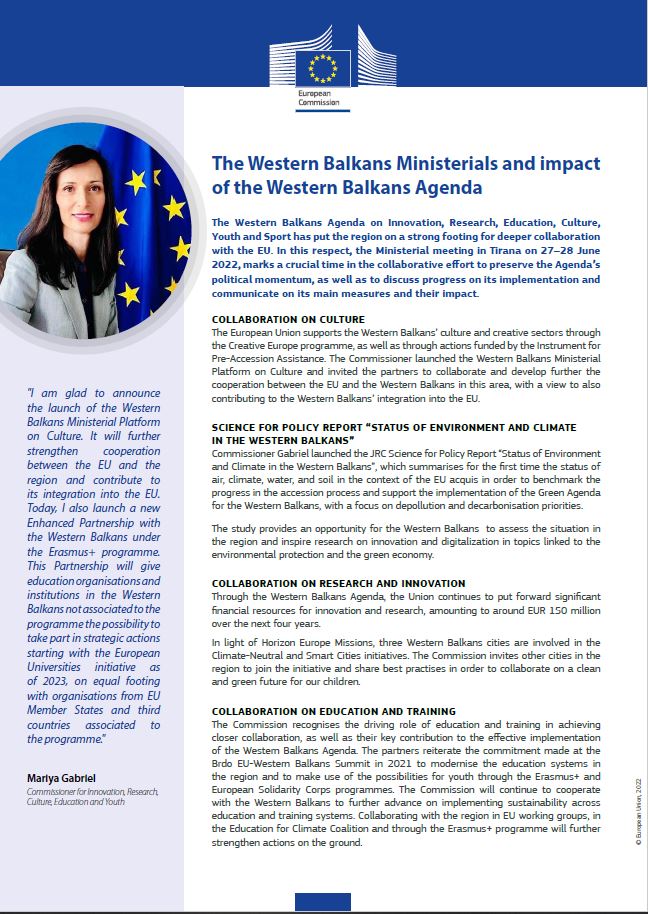 The Western Balkans Agenda on Innovation, Research, Education, Culture, Youth and Sport has put the region on a strong footing for deeper collaboration with the EU. In this respect, the Ministerial meeting in Tirana on 27–28 June 2022, marks a crucial time in the collaborative effort to preserve the Agenda’s political momentum, as well as to discuss progress on its implementation and communicate on its main measures and their impact.

Commissioner Gabriel launched the JRC Science for Policy Report “Status of Environment and Climate in the Western Balkans”, which summarises for the first time the status of air, climate, water, and soil in the context of the EU acquis in order to benchmark the progress in the accession process and support the implementation of the Green Agenda for the Western Balkans, with a focus on depollution and decarbonisation priorities. The study provides an opportunity for the Western Balkans to assess the situation in the region and inspire research on innovation and digitalization in topics linked to the environmental protection and the green economy.

COLLABORATION ON RESEARCH AND INNOVATION

Through the Western Balkans Agenda, the Union continues to put forward significant financial resources for innovation and research, amounting to around EUR 150 million over the next four years. In light of Horizon Europe Missions, three Western Balkans cities are involved in the Climate-Neutral and Smart Cities initiatives. The Commission invites other cities in the region to join the initiative and share best practises in order to collaborate on a clean and green future for our children.

COLLABORATION ON EDUCATION AND TRAINING

The Commission recognises the driving role of education and training in achieving closer collaboration, as well as their key contribution to the effective implementation of the Western Balkans Agenda. The partners reiterate the commitment made at the Brdo EU-Western Balkans Summit in 2021 to modernise the education systems in the region and to make use of the possibilities for youth through the Erasmus+ and European Solidarity Corps programmes. The Commission will continue to cooperate with the Western Balkans to further advance on implementing sustainability across education and training systems. Collaborating with the region in EU working groups, in the Education for Climate Coalition and through the Erasmus+ programme will further strengthen actions on the ground.

"I am glad to announce the launch of the Western Balkans Ministerial Platform on Culture. It will further strengthen cooperation between the EU and the region and contribute to its integration into the EU.
Today, I also launch a new Enhanced Partnership with the Western Balkans under the Erasmus+ programme.
This Partnership will give education organisations and institutions in the Western Balkans not associated to the programme the possibility to take part in strategic actions starting with the European Universities initiative as of 2023, on equal footing with organisations from EU Member States and third countries associated to the programme."